The ultimate aim is to encourage operators to invest in competitive networks and to extend them nationwide.

This scoreboard is based on auditing performed in the field, which makes it possible to publish reliable information, and notably to verify the accuracy of the coverage maps published by mobile operators. Operators are required to correct any inaccuracies in their maps that are ascertained during the audit, which was the case during the last verification in July 2014. A new audit, carried out in Q1 2015 and including more than two million measurements, allowed the Authority to verify operators’ latest 3G and 4G maps.

Orange and Bouygues Telecom, which were already ahead in July 2014, continue to have a significant lead in 4G coverage. The 4G coverage provided by SFR increased substantially between July and December 2014: from 30% to 53% of the population of mainland France. This increase is due in part to the roaming rights that SFR offers its customers on the Bouygues Telecom 4G network, most of which became available in November 2014. Of all the operators, Free Mobile has the least extensive 4G coverage. 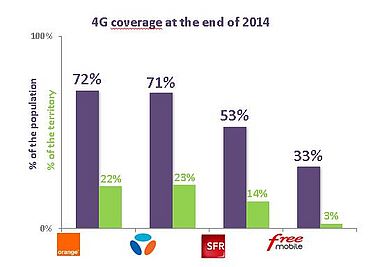 Very substantial 4G rollouts still need to be performed, however, as close to 70% of the territory is still not covered, and close to 20% of the population of Metropolitan France does not have access to 4G, regardless of which operator they use.

ARCEP reminds the public that, under the terms of their licences, Bouygues Telecom, SFR and Orange are required to be covering 40% of the population in low-density areas (1) by January 2017, i.e. 18 months from now. The Authority will be very careful to ensure that these obligations are met.

The coverage maps that operators publish, and which ARCEP uses to produce its scoreboard, depict the availability of a basic service, which corresponds to a user’s ability to make a phone call or download small files when outdoors in a static position.

At this stage, however, these maps do not make it possible to represent the vast array of circumstances under which users employ their services, which are often less ideal (in a car, indoors, on a train, etc.) and for which they expect an equally high degree of quality (perfect quality of voice calls, fast connections, etc.).

ARCEP is therefore willing to add to mobile operators’ obligations so that more detailed and reliable maps can be available for the public, which would require changes to existing regulations.

(1) These correspond to 63% of the territory and 18% of the population, for which specific obligations were established when allocating the 800 MHz band. Free Mobile, which has no spectrum in this band, is not subject to this obligation.

Complete mobile coverage and quality of service scoreboard (in French)