The pace of shared optical local loop rollouts has increased considerably in recent months: 33% increase in eligible premises in one year, or an increase of around 900,000 between Q3 2013 and Q3 2014, and expected to continue to increase, especially outside very high-density areas. The future development of optical fibre networks, and the successful sale of access products on a large scale will depend in particular on having wholesale and retail markets that are economically and technically homogenous nationwide.

This homogeneity is not guaranteed, however, since, unlike with the copper local loop, a wide variety of public and private sector undertakings are involved in deploying optical local loops. It is therefore essential that the wholesale market’s “industrialisation” continue apace with network rollouts. This is why, as it announced in November 2013 (1), ARCEP continues to work on clarifying the pricing and operational aspects of accessing shared last mile connections, which apply to all operators and across the whole of France.

Achieving homogeneous pricing schemes is part of the “regional equality and solidarity” objective that is a central tenet of France’s superfast broadband plan. It also meets European Union guidelines on State aid in support of the rapid deployment of broadband networks: these guidelines lay out the principles of benchmarking to be able to compare the wholesale rates charged for networks receiving public monies and those relying solely on private initiative.

It is within this environment that a number of parties (both operators and local authorities involved in fibre network rollouts) expressed to ARCEP their need for greater clarity on the mechanisms provided for in the regulatory framework for determining wholesale tariffs. This increased clarity will in turn allow them to establish a more accurate business plan:

To tackle these issues, ARCEP held a public consultation from 16 May to 11 July 2014 on a generic pricing model for accessing fibre-to-the-home networks outside very high-density areas (2).

Once the consultation (which received 16 responses, including six from operators and eight from local authorities and local authority associations) was complete, ARCEP was able to ascertain that most stakeholders approved the general principles of the suggested model, while expressing some reservations about certain aspects of its implementation (3).

Following this consultation (which received 16 contributions, including six from operators and eight from local authorities and their representative associations), ARCEP was able to ascertain that most market players supported the general principles being proposed, while expressing some reservations.

As the first public consultation confirmed, if this pricing model is intended to apply, on a comparable basis, to all undertakings operating a fibre-to-the-home network regardless of whether they come from the public or private sector, public initiative networks do have certain specific properties that need to be taken into account. 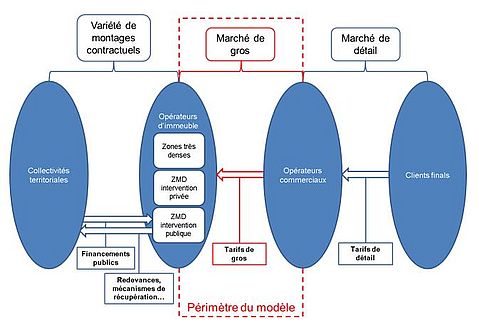 Second, the wholesale rates that a public initiative network can charge are subject to European State aid regulations which impose a principle of comparability with the rates established in those areas where operators are deploying superfast access networks without State aid. These wholesale rates are thus subject to guidelines, on top of the symmetrical regulation put into place by ARCEP, which are based not on actual rollout costs and the network revenue take into account, but rather on benchmark tariffs observed in more sparsely populated public initiative areas.

Because of these particular aspects, determining the proportionate level of Sate aid and, at the same time, establishing a balanced economic relationship between the local authority and its contractual partner appear vital to ensuring that the building operator apply a rate schedule that is consistent and compliant with European guidelines. The level of State aid must thus apply equally to all of the wholesale rates charged by a public initiative network, particularly between the co-financing offer, the line rental offer and, when applicable, the activated service. This consistency is essential to ensuring the legal certainty of local authorities’ financing plans over time. To facilitate the use of the modelling tool being made available as part of these projects, the proposed spreadsheet provides specific entry options for the different types of publicly-funded projects, which guide the information provided for different parameters. However, local authorities wanting to use the model in a more advanced fashion, for establishing their rate schedules, are invited to contact ARCEP staff.

To provide a complete tool for modelling a complete rollout project, and taking utmost consideration of the stakeholders’ feedback to the first consultation, in this new consultation ARCEP is proposing to expand the operational scope of the pricing model, to take into account the sections of the network located upstream from the concentration point, and downstream from the optical branching unit. The pricing model presented in this consultation make it possible to establish separate wholesale rate models for the different parts of the shared networks. The following are thus included in the scope of the different stages of the modelling tool: