2015: a year of exceptionally high investments

Totalling €10.6 billion, including spending on frequencies, operators' investments increased sharply in 2015 (+50.2% in one year) due to 700 MHz frequency band allocations on which €2.8 billion were spent. More significantly, investments excluding spending on frequencies also reached a record high of €7.8 billion, which marks a more than 10% increase over the previous year.

Consumption habits continue to evolve as users make increasing use of mobile data services, which are flourishing, whereas messaging and mobile calling traffic are increasing only moderately.

With the number of users on 4G networks doubling in one year (now representing one in three SIM cards), and rising usage on 3G networks (two-thirds of all SIM cards), data traffic climbed to 560,000 Terabytes in 2015, which marks an 83% increase year on year (YoY). This translates into average traffic of up to 1.2 Gigabytes a month per mobile internet user. Despite the popularity of instant messaging on mobiles, sending SMS remains a common and growing practice: an additional 5 billion text messages were sent compared to 2014, for a total of just over 200 billion text messages in 2015. Mobile calls account for two thirds of all voice calls, a proportion that continues to grow year on year due to a rise in mobile traffic (+3.2% in 2015) and the concomitant decrease in calls originating on fixed networks (-7.9% in 2015). Overall calling traffic (fixed and mobile) in France decreased for the second year in a row (-1.1% YoY).

Two outstanding features of French overseas markets are the high rate of mobile ownership (2.7 million SIM cards, which translates into a penetration rate of 123.9%) and the heavy use of prepaid cards, which account for up to 75% of the base in Mayotte. The revenue earned by operators in overseas markets stood at €1.2 billion excl. VAT in 2015, of which €711 million for mobile services, which marks a slight decrease (-1.5%) over the previous year. As in Metropolitan France, consumption habits are evolving, with the growing adoption of fixed broadband and superfast broadband plans (+3.3% YoY), which are being bundled more and more with a voice over broadband service (50% of telephone subscriptions) or a pay-TV plan (45% of subscriptions). Two thirds of calling traffic originates on mobile networks (+5.9% YoY), despite which fixed calling traffic increased by 3.6% on the year thanks to the widespread use of VoBB. Mobile data traffic increased by 38.1% compared to 2014, due to an increase in the number of 3G users (+37.5% or 45% of all SIM cards). SMS traffic, on the other hand, has been on the decline for two years in the departments of Antilles and Guyana, bringing the number of text messages sent down to 4.7 billion in 2015 versus 5 billion in 2014. 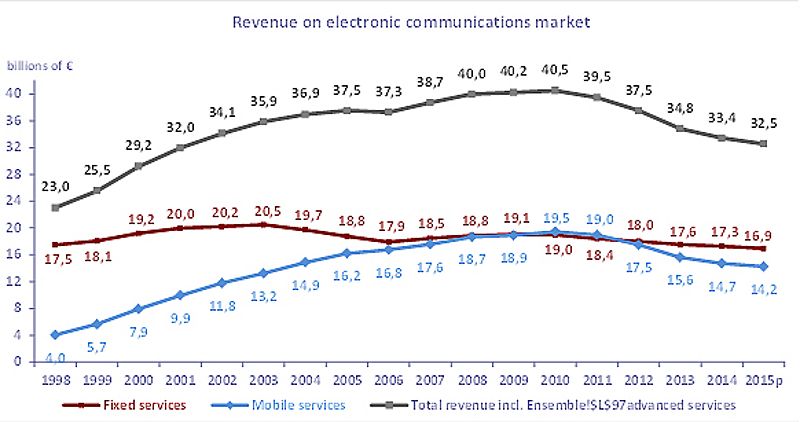