Methodology based on the concept of minimum expenditure

Arcep adopted the INSEE methodology for consumption profiles. Fixed and mobile service customers are each synthesised by a set of typical consumers whose profile is representative of a portion of the total clientele, with each profile corresponding to different levels of calling, data and SMS consumption. Arcep then calculates the minimum expenditure associated with each of these profiles.

The minimum expenditure is the theoretical minimum bill in current euros, including VAT, for a consumer who "optimises" her spending based on her consumption throughout the period. The variation in this minimum expenditure can be attributed either to a change in consumption levels (volume effect) or in the price of the services (price effect). Calculation of the price index is based on this notion, once the volume effect has been neutralised.

Prices remained stable between 2014 and 2015 for broadband and superfast broadband internet access products. This nevertheless hides a 2.5% price hike over the course of 2015 resulting from an increase in the price of superfast access plans.

The price of narrowband fixed telephone services increase by 3.5% in one year, following a €1 hike in the price of telephone subscriptions in March 2015. 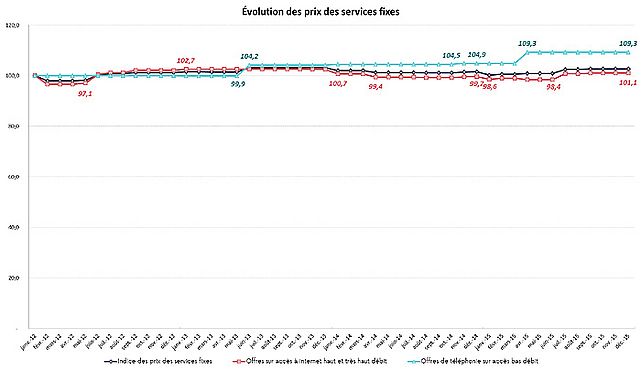 Prices in the prepaid card market have remained very stable since the second half of 2013.

The price of flat rate plans continues to decrease but at a much slower rate than before: -5.7% on the year in 2015, or almost two times less than in 2014. There are two main reasons for this price decrease: first, the swift development of SIM-only plans, i.e. without a subsidised handset; second, the trend of increasing the data allowances attached to plans whose price remains unchanged.

For mobile customers with a flat rate plan, price decreases are more pronounced the less they consume. For heavy consumers, prices remained virtually unchanged in 2015: -0.4% compared to 2014. Average and light consumers, on the other hand, saw more substantial decreases of -5.1% and -12.2%, respectively. 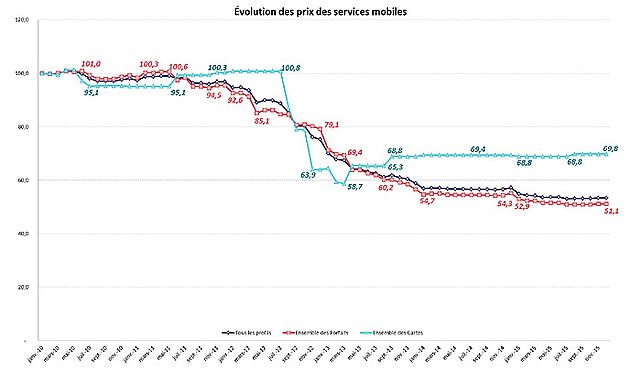 The price index neutralises the impact of changes in volumes of traffic consumed. But changing consumption habits are driving an increase in the amount of traffic users generate, notably for data services: +117% between June 2014 and June 2015 for all types of mobile contract combined. As a result, the decrease in price does not necessarily translate a decrease in consumer spending.