In 2016, Arcep published its first scoreboard on the transition to IPv6, with a view to accelerating the pace of rollouts in France.

Why accelerate the transition from IPv4 to IPv6?

The combination of the internet's success, the range of uses and the growing number of connected products has resulted in the gradual depletion of available IPv4 addresses. The cost of managing the dearth of IPv4 addresses, and the malfunctioning of certain types of service led the IAB (Internet Architecture Board) to recommend standards that, from hereon in, would be designed and enhanced solely for the IPv6 protocol. This provides users and website publishers with more freedom, and allows them to no longer be burdened by the limitations created by these intermediate links in the chain. For France, accelerating the pace of the transition is thus vital to innovation and competitiveness.

Arcep's scoreboard on the transition to IPv6 is part of its data-driven approach to regulation, and is aimed at accelerating this process by providing transparency on major players' achievements and plans.

On fixed networks, a great many of the top four ISPs' customers have an IPv6-ready box. However, among these compatible customers, the percentage who actually transmit and receive IPv6 traffic still varies a great deal depending on their ISP. This in turn has a direct impact on the rate of use of IPv6, in other words the percentage of internet traffic that is IPv6 traffic, as actually logged by the servers hosting content at the end of the chain: 35% for Free, 33% for Orange and less than 1% for Bouygues Telecom and SFR.

Forecasts for 2018 and 2020: have all operators fully gauged the importance of this issue? 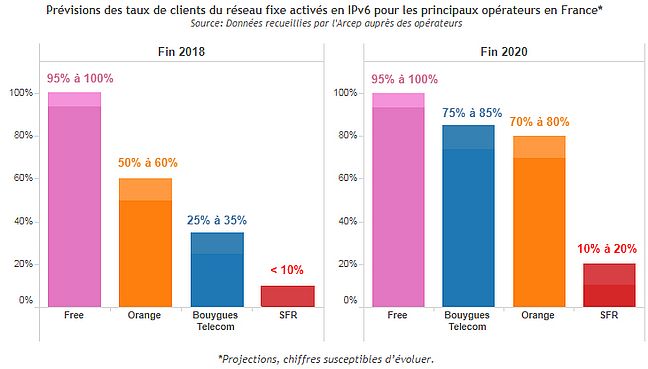 Arcep is publishing ISPs' early forecasts on activated customers, as of the end of 2018 and the end of 2020. For this forecasting exercise, figures are provided in the form of ranges, which are likely to change over time. If it were to occur in the short or medium term, an increase in the percentage of customers with an activated IPv6 access would have an automatic impact on the previously stated rate of IPv6 use.

A second edition with two major improvements: the addition of data collected from operators and deployment forecasts

The publication of this new edition is marked by two major additions:

- In addition to the data produced and made available by third parties, the scoreboard now also includes data that Arcep has collected directly from France's leading ISPs;
- The current status and past increases in the adoption of the IPv6 protocol are now completed by early short- and medium-term forecast from ISPs.