Electronic communications market scorecard for 2013: strong increase in traffic and subscriptions, but a drop in revenue for operators

Fixed and mobile telephone traffic continued to increase in 2013 (240 billion minutes, +2.8% compared to 2012) thanks to a strong increase in voice calls on cellular networks (18 billion additional minutes in 2013). This tremendous upsurge in mobile traffic is occurring at the expense of voice traffic on wireline networks, which shrank by 10% on the year. By the same token, data traffic on mobile networks continues to rise at a tremendous pace: 10 billion more SMS sent and a 63% increase in data traffic initiating on cellular networks compared to 2012. Data traffic on wireline networks has not been measured specifically, but it is considerably heavier than mobile network traffic, and growing rapidly. Lastly, mobile and wireline subscription numbers continue their swift increase: a 5% annual increase for mobile and a 4% increase for broadband and superfast broadband subscriptions.

On the flipside, electronic communications operators' wholesale and retail market revenue in 2013 totalled €46.6 billion, excluding VAT which, calculated on a comparable basis, is 6.4% less than in 2012. The retail market alone represented €38 billion in 2013, of which €35.1 billion was generated by electronic communications services. The merger of France Telecom and Orange France in June 2013 put an end to the financial transactions between the two undertakings, which primarily affected the wholesale market between carriers, but also the capacity services retail market to some degree. On a comparable basis, operators' retail market revenue in 2013 decreased by an estimated 7.7% compared to 2012.

Operator spending in 2013 came to €7.2 billion, which is equal to 1.5% of France's national gross fixed capital formation (GFCF). Excluding the sums that operators spent on acquiring licences (€2.6 billion in 2012), investment levels have been consistently above €7 billion for the past three years. Operators' mobile business accounts for a around a third of their capital expenditures, with spending on new generation high-speed mobile (3G and 4G) systems in 2013 estimated at around €1.7 billion. 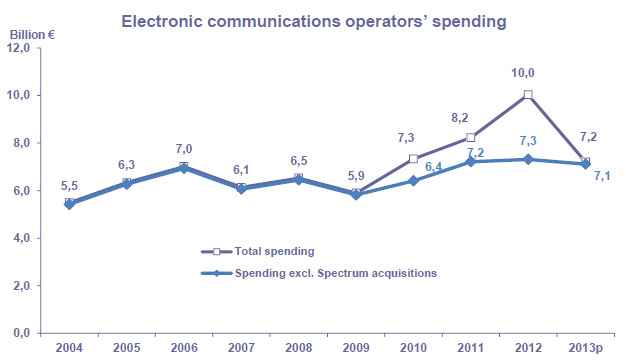 Electronic communications operators employed 125,000 people directly at the end of 2013. After decreasing steadily for around ten years, operators' employment levels had been improving overall for the past three (2010, 2011 and 2012) but, in 2013, staff numbers shrank by around 4,000 jobs, which marks a 3.3% decrease on the year. A portion of this decrease is due to employee transfers within telecom groups, as certain operations that carriers once ran themselves were transferred either to their subsidiaries or to outside vendors. The top five undertakings report a combined decrease of 3,300 jobs between 2012 and 2013. The bulk of this figure can be attributed to Orange, while job losses and new hires at the other operators balance each other out. The total number of direct jobs in 2013 was higher than in 2009. 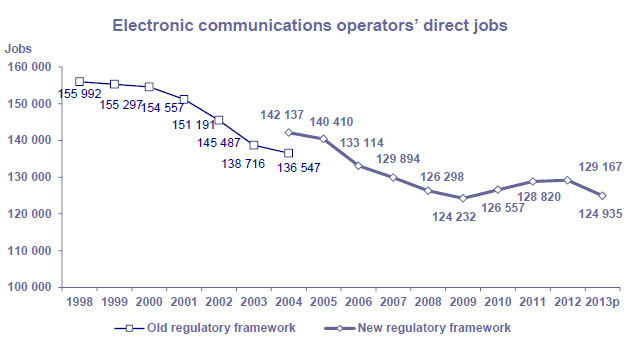