ARCEP is publishing today the results of a study, commissioned of TNS Sofres, to understand users' expectations of mail service.

For this initial study on the subject, ARCEP decided to focus on the practices and expectations of users of so-called "individual" mail, which until now had been little or poorly understood. These are households and businesses, in particular small- and medium-sized firms. While the postal expenses of these users can be great with respect to their budget, they do not have any bargaining power with operators.

This information will allow ARCEP to understand which characteristics of universal service are the most important to users.

The study first of all identifies the "postal behaviours" of businesses and households. It analyses their behaviour as senders and recipients of three products (letters, parcels and registered mail).

Letters
The study shows that households and businesses are primarily recipients of letters. Because of the influence of major originators , the households and businesses surveyed receive more letters than they send (94% of businesses and 57% of households receive at least one letter every day or almost every day, whereas 68% of businesses and 6% of households send one every day or almost every day).
For households, people living in the Paris region (24% receive more than 10 letters per week and 24% send more than 10 per month) and high income groups (24 and 23%) are the biggest senders and recipients. On the other hand, households of people over the age of 65 receive the fewest letters (59% receive fewer than 5 per week).

Registered mail
Registered mail is used less frequently than ordinary mail.
In volume, households and businesses more often send less registered mail than they receive. Businesses use registered mail more frequently than households. Again, certain categories of businesses use it more often: legal (79% receive at least four items per month and 75% send at least four items per month), financial intermediaries (72% and 81%) and real estate services (49% and 69%). Often, those who send the most also receive the most.
About one-half of households has sent and/or received registered mail during the past 12 months. The largest originators and recipients of the service are high income groups (68% have received at least one registered letter and 67% have sent at least one in the past 12 month), internet users (66% and 68%) and households in the Paris region (64% and 64%). The behaviour of those over the age of 65 is worth noting: they use registered mail less frequently (41%), but when they use it, they use it in greater proportions than the average of other households (23% of users over the age of 65 have sent six or more registered items compared with an average of 16% for households). 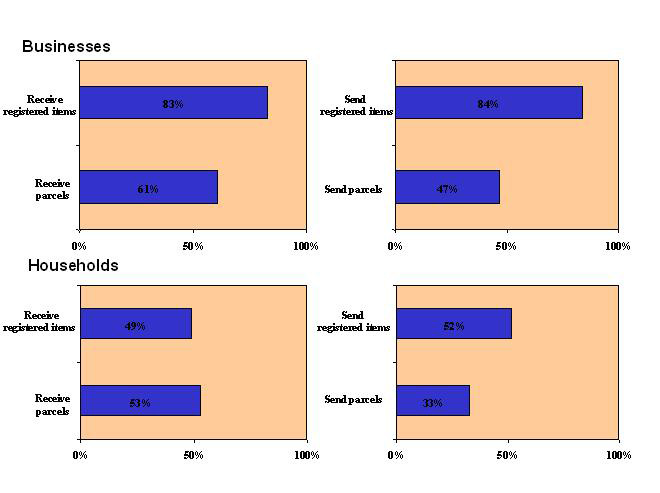 Parcels
Parcel use is less common and less frequent than letters and registered items. Like letters, households and businesses receive more parcels than they send. Only 47% of businesses report having sent a parcel in the past 12 months whereas 61% of them report having received one. Similarly, 33% of households report having sent at least one parcel during the past 12 months whereas 53% report having received one.
As for businesses, parcels are used primarily by a few major originators, notably in the transport (29% send at least four per month) and commerce sectors (27% overall and 33% in wholesale commerce). The vast majority of businesses send parcels only occasionally. Professionals receive most parcels from other professionals. Of these, 76% are sent using the Colisssimo service.
Although households send few parcels overall, a non-negligible portion of them use this product massively: 40% of households which send parcels send at least four per year, and 50% of those which are recipients receive at least four per year. The development of on-line sales, including between individuals through web sites like eBay, could be the origin of this phenomenon. Most often, households send parcel to other households (82%). However, they receive parcels primarily from businesses (61%). The biggest users of parcels are high income groups (63% have received at least one in the past 12 month and 44% have sent at least one), internet users (64% and 41%) and households in the Paris region (57% and 38%)

Significant expectations
For each of the products (letters, registered mail, parcels) interviewees were asked to rank a number of characteristics (delivery time, reliability, ease of delivery, etc.) according to preference, then to state the level of service they expect for each of these characteristics (e.g. for delivery time, delivery in D+1/D+2 or D+5) . They were not to consider price, because price significantly influences the results and biases the perception of users' intrinsic expectations on the other characteristics which form the heart of the study.
The ranking of preferences for the characteristics are summarised in the table below. Households' preferences are shown in pink, those of businesses in black.
More detailed analyses which nuance these rankings are then given with respect to the choices expressed for the levels of service. The "plus signs" and "minus signs" show the intensity of the expectation for each of the characteristics on the part of service users. The "minus signs" do not mean that users do not want the service or that they are not interested in it, but mean that the characteristic is less important than those which have been given a "plus sign". The characteristics are ranked with respect to each other and independently of the monetary value that postal service users would give them.

The expectations of customer segments (households and businesses) are very homogenous overall for each service evaluated and for the characteristics of sending and receiving.

Routing time, always expressed in the format D+1, is the most important expectation expressed. Information on tracing does not appear to be an important criterion in customers' expectations, except when businesses send registered items. Finally, the number of distribution days per week is an important criterion for receiving mail. The two customer segments are very attached to distribution six days a week.

The importance of D+2 distribution for parcels
Eighty percent of households and more than 60% of businesses could settle for D+2 distribution for parcels. However, this attitude must not hide the fact that routing time is the most important criterion overall.
Ease of use is also important for both sending and receiving. Ease of delivery in case of absence is even the number-one criterion for households receiving parcels and number two for businesses. The convenience of the handover point is also the second criterion for businesses sending parcels.

Handover time limit for letters
Two-thirds of businesses would like to see a later handover time limit for letters. This is the second most important criterion for them after routing time. It is similar to the expectation for speed of delivery which was expressed through the importance of D+1 delivery.
It is also important to note that practices for receiving mail also seem to reflect a need for speed. Twenty percent of businesses use alternate distribution processes than distribution by the letter carrier. This can be collection by a company employee directly from the post office (14%), delivery by a special La Poste run (5%) or delivery by a company other than La Poste (1%). When someone from the company picks up the mail at the post office, they most often do so before 9.00 am (54%) and generally before 10.00 am (83%).

Very high expectations for the reliability of registered mail
Households and businesses use registered mail for different reasons.
The main expectation of households using registered mail for sending or receiving an object is reliability: "I want to be sure it gets there" (50%).
The situation is different for businesses for which purchasing registered mail is primarily motivated by the proof of distribution/signature of the recipient (48%).
As for the characteristics of the service, the expectation of speed is once again of primary concern when sending, whereas distribution convenience is the most important for receiving, although routing time comes second in the order of importance.

Perceived incident rate
The number of those surveyed reporting having not received mail may at first glance seem relatively high: 22% of households and 31% of businesses report not having received an item they were expecting or having received it damaged during the past 12 months. However, it is important to note, on the one hand, that these are perceived losses, and on the other, that this corresponds to a loss rate of about 1.6 per 10 000 . Finally, 11% of all households and 16% of all businesses report having lodged a complaint with La Poste, which, given the perceived incident rate, may either reflect a degree of tolerance or difficulties in gathering the elements required for a claim.