ARCEP Chairman, Jean-Ludovic Silicani travelled to Geneva on Wednesday, 7 October on the invitation of Mr. Hamadoun Touré, Secretary General of the International Telecommunication Union, to take part in a regulators’ round-table that was held as part of the 2009 edition of Telecom World, an event organised every three years by the ITU.

In his talk, Mr. Silicani focused on several fundamental principles of regulation which are particularly crucial in times of crisis:

In response to a question, the Chairman of the Authority stressed the fact that the goal of regulation is not to achieve "maximum" regulation but rather "optimum" regulation, which can generate a fair return on investment while enabling operators to continue to innovate, provided a portion of gains are passed on to consumers in the form of lower prices and/or marketing innovations. 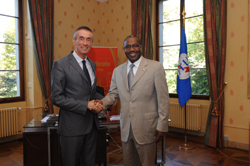 The Chairman’s talk is available in English