Starting on 1 October 2015, the system used for fixed number portability is changing, becoming simpler and more secure thanks to the creation of a fixed operator identity statement, or RIO (relevé d'identité opérateur). As with mobile number portability, this is a code that customers need to obtain from their old operator and transmit to their new operator when switching to a new plan. Each landline number is associated with a unique fixed operator identity statement. To obtain their fixed RIO, customers must call the freephone number 3179 from their landline: the RIO will be communicated to them verbally, and later confirmed in writing, using the method of their choice, i.e. via SMS, e-mail or the post.

The operator identity statement is a simple system used by all operators. It makes it possible to ensure, first, that there are no errors in the number to be transferred from one operator to another and, second, that the subscriber is legally authorised to keep this number. Use of the RIO system will facilitate the portability of numbers starting with 09, as well as portability for subscriptions to superfast broadband plans.

This latest change marks the conclusion of the project to redesign fixed number portability that began in 2011 with wireline carriers, and the French association of standardisation platforms for inter-operator flows, or APNF (Association des platforms de normalisation des flux inter-opérateurs).

As of 1 October 2014, the new system has made it possible to recover a fixed telephone number when a customer cancels their contract with their old operator by mistake, before asking to keep their number. Any subscriber who finds themselves in this situation is invited to follow the instructions provided by their new operator, which will guide them through the process of recovering their old number.
Lastly, the new system provides subscribers with more and clearer information: a series of messages will guide users through the different stages in the process, from obtaining their operator identity statement, up to the actual porting process, which includes confirming that their request has been received. These messages are sent by SMS, e-mail or the post, depending on the contact information provided to the subscriber's new operator.

The new operator is the subscriber's sole interlocutor throughout the process, right up to the actual porting of the number which results in the automatic cancellation of the subscriber's contract with their old operator. To ensure that the interruption of service between the two contracts be as brief as possible, it is crucial that the subscriber not perform this cancellation herself.

In the case of bundled plans (i.e. a fixed and mobile service attached to the same contract), this cancellation will apply only to the services provided over the fixed or mobile access line that are associated with the number being ported. In other words, the porting of a fixed (or mobile) number will result only in the cancellation of the fixed (or mobile) services attached to that number.

To find out more, visit the ARCEP website: www.telecom-infoconso.fr (in French only) 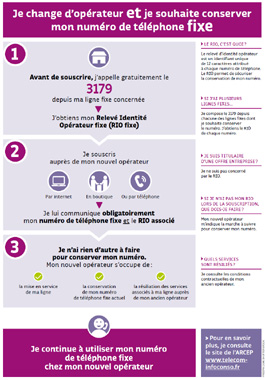 Infographic: "I change operator and wishes to keep my number fixed phone ": manual (pdf - 156 Ko) (in French only)