On 9 October 2014, the European Commission adopted a new recommendation that lists the markets susceptible to ex ante regulation (aka the list of relevant markets), whose previous version dates back to 2007. In this new recommendation, the Commission considers it to be justified to remove access to the public telephone network at a fixed location (market 1) and call origination on the public telephone network provided at a fixed location (market 2) from the list, in particular because of the decline in traditional telephony on the PSTN, and the emergence of products based on alternative technologies, on the one hand, and the new segmentation of fixed access markets (markets 4, 5 and 6), on the other.

Having anticipated these conclusions, ARCEP had already decided:

On the matter of fixed telephony markets (markets 1 and 2), through the above-mentioned decision, ARCEP has begun a process of streamlining "mainly telephone" wholesale products, in view of the eventual phasing out of the PSTN. It thus provides for a progressive deregulation of Orange "straight" wholesale carrier selection products (call by call and preselection sold without access to the associated telephone service) whose popularity has decreased sharply. Only the more complete wholesale line rental product (VGAST), which includes access to the telephone service and associated calls, continues to be regulated.

ARCEP has also lifted the asymmetrical regulation imposed on Orange for its call origination services for calls to value-added service (VAS) numbers, pursuant to its analysis of the market for call origination provided at a fixed location (market 2). This completes the transition to the single symmetrical framework for calls to VAS services established by Decision No. 2007-0213 (pdf - 229 Ko), which applies equally to all fixed and mobile operators in France.

***
N.B.: The Commission recommendation on "relevant product and service markets within the electronic communications sector susceptible to ex ante regulation" is a non-legally binding document that national regulatory authorities (NRA) in European Union Member States must take into utmost consideration. The first recommendation, published in 2002, listed 18 markets. This list was reduced to seven markets in 2007, then to five in this latest recommendation. 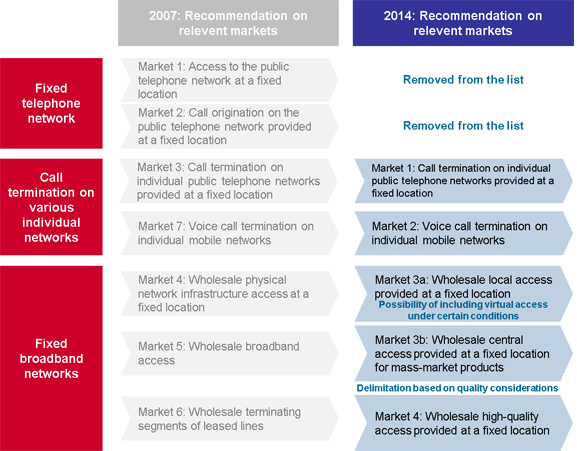