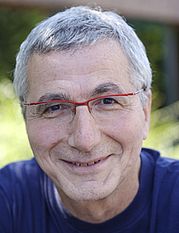 Director of Research in computer sciences at the École Normale Supérieure de Paris and at Inria (the French National Institute for computer science and applied mathematics), Serge ABITEBOUL has a PhD from the University of Southern California, and a Doctorate (thèse d'État) from the Université de Paris-Sud. His work on data, information and knowledge management - notably on the internet - and his theories on databases earned him membership in the Academy of Sciences in 2008, and in the Academy of Europe in 2011.

He is also a lecturer at the École Polytechnique and guest lecturer at Stanford and Oxford University. In 2011, he was appointed to the Collège de France Research Chair in computer and digital sciences. In 2013, he joined the French Digital Council, chaired by Benoît Thieulin, and that same year became President of the Scientific Advisory Board on the Information Society in France. He as been the chairman of the Fondation Blaise Pascal Strategic Council since 2017.

The author of numerous publications on data and algorithms, as well as a novelist, Serge ABITEBOUL is the editor and founder of Blog binaire. He was the curator of the Terra Data exhibition at the Cité des sciences et de l'industrie in 2017 and 2018.

Serge ABITEBOUL is taking over from Jacques STERN whose term as a member of the Arcep Executive Board has come to an end. Arcep salutes the precious contributions that Jacques STERN made to the Authority's work.

→ Notice of appointment, published in the Journal officiel