To provide more clarity to local authorities that are investing in fibre network rollouts, in December ARCEP will adopt guidelines on wholesale pricing for public initiative networks (PIN). This process is pursuant to the Act of 6 August 2015 on Growth, Business and Equal economic opportunity, and part of the Plan France Très Haut Débit ultra-fast broadband rollout programme. The draft version of the text is being submitted to a public consultation that will run from 6 October to 6 November 2015.

Public authorities need to be involved in deploying fibre in the more sparsely populated parts of the country, and so to prevent a new digital divide from forming. To protect public investments, the legislature concluded that the principles governing the wholesale prices that Internet Service Providers (ISPs) are charged to access these public initiative networks needed to be clarified, and has given ARCEP the task of helping local authorities establish their pricing grids which, in turn, will help them to market their networks. One core objective is to ensure that fibre network rollouts help reduce the digital divide, by creating the conditions that enable homogenous retail market products nationwide. These guidelines also seek to provide local authorities with greater clarity when negotiating with ISPs, which often enjoy significant buyer power.

ARCEP has also taken utmost account of the European framework, and particularly European laws on State aid, to ensure that projects instigated by local authorities remain viable over the long term. The principles set by law and the European framework stipulate that the purpose of public subsidies in public initiative service areas is to make it possible to charge the same prices as in private initiative service areas. The Authority nevertheless asserts that, because PIN have certain specific characteristics, it is not always possible or opportune for prices in these two types of service area to be identical from the outset. As a result, to allow the prices charged in public and private initiative service areas to align gradually over time, ARCEP is proposing a three-stage roadmap:

- In the first stage, ISPs will be charged incentive pricing schemes on a temporary basis.

- In the second stage, ARCEP suggests capping prices during the time it takes to get up and running, to ensure the project's economic stability over the medium term, and to enable PIN stakeholders to start coming in line with the prices charged in private initiative service areas.

- Finally, in the third and final stage, PIN will be able to charge the same prices as those being charged in private initiative service areas.

The following table lists the prices charged according to the products and the stage: 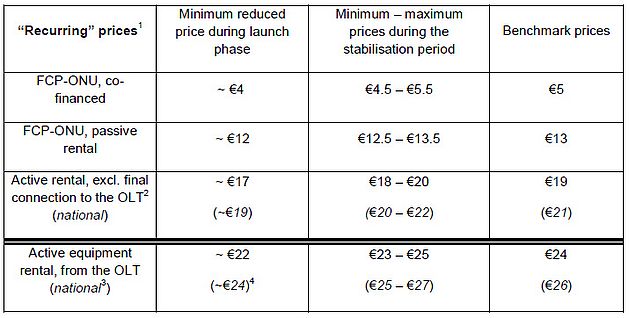 ________________
(1) Covering only the cost of the network section between the fibre concentration point (FCP) and the optical network unit (ONU), excluding backhauling costs and last metre connection and remote connection costs when applicable.

(2) Covering the cost of the section between the FCP and ONU, activation fees and monthly remote connection costs which ARCEP currently estimates at around 5 euros and 1 euro, respectively.

(3) Covering the cost of the section between the FCP and ONU, remote connection costs, activation fees, monthly national backhaul and last metre connection, which ARCEP currently estimates at a maximum 2 euros and roughly 5 euros, respectively.

(4) These reduced prices do not take into account any possible discounts on "non-recurring" prices that may be agreed upon.

ARCEP has been working on FTTH network pricing since 2013, notably through two public consultations on a generic pricing model. As a result, the accompanying document for this model, which was published as an adjunct to the draft guidelines, details the pricing principles the Authority has established for the entire country.

Stakeholder responses to the second public consultation on the model (zip - 7.97 Mo) (zip)